Last Sunday afternoon after a nice chat to my parents and nana, I went out to Dongyue Temple. This is a Taoist temple just outside the 2nd ring road in Beijing on the east side, only a 10 minute bus ride from my house and because its now the off peak season, it only cost me 10 yuan.

The temple is organized around 3 main courtyards, it has 376 rooms and covers 4.7 hectares. The courtyards hold a collection of stone tablets. About 140 stone tablets dating from the Yuan, Ming, and Qing Dynasties as well as from the Republican Era of China are thought to have once stood in the temple, 90 tablets remain today. Among the remaining tablets is a Yuan-Dynasty tablet with calligraphy by Zhao Mengfu. This tablet is the only remaining piece in a set of four, its inscription give an account of the life of the temple founder Zhang Liusun and consists of 2786 characters in total.

The three main halls of the temple are Yude Hall, Daizongbao Hall, and Yuhaung Hall. Yude Hall displays statues made from Jinsi Nanmu wood, among them statues of the gods of heaven, earth, and water. The temple once contained more than 3000 steles in total of which about 1000 have been preserved. Surrounding the central courtyard is a succession of small rooms that open to the courtyard and each display an ensemble of plaster statues depicting one of the “76 departments” of the Daoist supernatural world.

Me next to one of the removed roof decorations

This month I been writing this Blog for 5 years, started all the way back in November 2006. Oh boy, time does fly!

Ive started adding new photos of Winter, no snow yet, its only reaching below zero celcius at night at the moment. But more photos will come regularly.

The other weekend I went up into the mountains west of Beijing again, and this time I had my brand new iPod touch and decided to try out the video recording feature. Now you can see what I see aswell 🙂 Its bad qualiy I think but its my first one I made, hopefully that’ll improve over time.

I went earlier today to the Temple of Earth that’s located just outside the 2nd ring road in Beijing. The weather was a cool and crisp autumn with clear blue sky with a dash of cirrus clouds. For lunch I had kebabs sitting under one of the many pine trees that are over 400 years old that are throughout the park. I spent several hours trolling through the hundreds of bookstores, there were even some who sold books by the kilo. But i was hunting for a certain niche of book. Books on ancient architecture primarily on old Beijing. With no one to translate for me and after 5 hours of hunting. I struck paydirt.

I didnt buy the book for the text since I cant read chinese yet, hopefully soon but not yet. I did buy it though for its maps and diagrams and break-downs of what the different elements of tradtional chinese architecture is and widely used during 1845 for the build project.

A Look Into The Book

This book will most definitely help with improving the accuracy of Project 1845 to make it a truly unique experience to build and fellow fans to discover.

We reached 1 million blocks built and I made this youtube video of its progress. I hope you enjoy.

Popularity for my Forbidden City project is rising. I’m even in a Minecraft newspaper under the “World First 1:1 100% Accurate Forbidden City Minecraft Project” header. Check it out here http://paper.li/Fluffgar/1307117701

At face value it may sound bad, but if you play minecraft you’ll understand what he means. It feels like quite an honor to get one of the game developers to regard my work so highly 🙂

If you want to see what all the fuss is about, check out the project in question by Clicking Here

I finally got hold of my first copy of my latest book Rising Aotearoa. 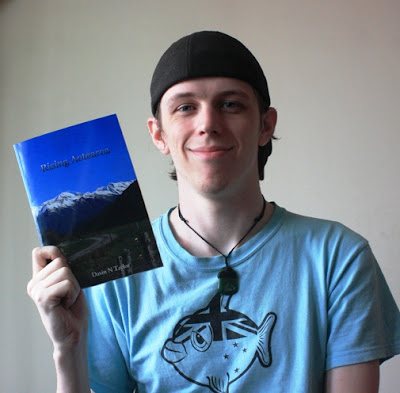 Hi There! *waves* My name is Ashley, I am a kiwi transgender person living in Australia.

I’m also known as Tycho, Bohtauri and Taylor Cook. Welcome to my blog.

Years and Years of Blog Archives